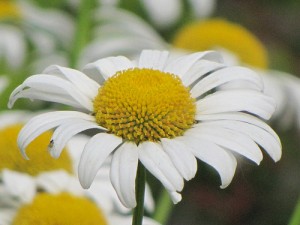 Many people have brought disaster into their lives through idle words.

For example: A woman once asked me why her life was now one of poverty of limitation. Formerly she had a home, was surrounded by beautiful things and had plenty of money. We found she had often tired of the management of her home, and had said repeatedly, “I’m sick and tired of things—I wish I lived in a trunk,” and she added: “Today I am living in that trunk.” She had spoken herself into a trunk. The subconscious mind has no sense of humor and people often joke themselves into unhappy experiences.

For example: A woman who had a great deal of money, joked continually about “getting ready for the poorhouse.”

In a few years she was almost destitute, having impressed the subconscious mind with a picture of lack and limitation.

Fortunately the law works both ways, and a situation of lack may be changed to one of plenty.

For example: A woman came to me one hot summer’s day for a “treatment” for prosperity. She was worn out, dejected and discouraged. She said she possessed just eight dollars in the world. I said, “Good, we’ll bless the eight dollars and multiply them as Jesus Christ multiplied the loaves and the fishes,” for He taught that every man had the power to bless and to multiply, to heal and to prosper.

I replied, “Follow intuition. Have you a ‘hunch’ to do anything, or to go anywhere?” Intuition means, in-tuition, or to be taught from within. It is man’s unerring guide.

The woman replied: “I don’t know—I seem to have a ‘hunch’ to go home; I’ve just enough money for carfare.” Her home was in a distant city and was one of lack and limitation, and the reasoning mind (or intellect) would have said: “Stay in New York and get work and make some money.” I replied, “Then go home—never violate a hunch.” I spoke the following words for her: “Infinite Spirit open the way for great abundance for — —. She is an irresistible magnet for all that belongs to her by divine right.” I told her to repeat it continually also. She left for home immediately. In calling on a woman one day, she linked up with an old friend of her family.

Through this friend, she received thousands of dollars in a most miraculous way. She has said to me often, “Tell people about the woman who came to you with eight dollars and a hunch.”