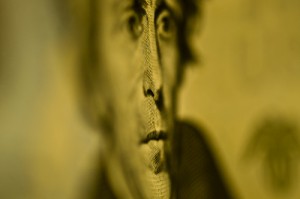 We see an example of hoarding in the film production of “Greed.” The woman won five thousand dollars in a lottery, but would not spend it. She hoarded and saved, let her husband suffer and starve, and eventually she scrubbed floors for a living.

She loved the money itself and put it above everything, and one night she was murdered and the money taken from her.

This is an example of where “love of money is the root of all evil.” Money in itself, is good and beneficial, but used for destructive purposes, hoarded and saved, or considered more important than love, brings disease and disaster, and the loss of the money itself.

She was very fond of necklaces, and a friend once asked her how many she possessed. She replied, “Sixty-seven.” She bought them and put them away, carefully wrapped in tissue paper. Had she used the necklaces it would have been quite legitimate, but she was violating “the law of use.” Her closets were filled with clothes she never wore, and jewels which never saw the light.

The woman’s arms were gradually becoming paralyzed from holding on to things, and eventually she was considered incapable of looking after her affairs and her wealth was handed over to others to manage.

Man in ignorance of the law, brings about his own destruction.