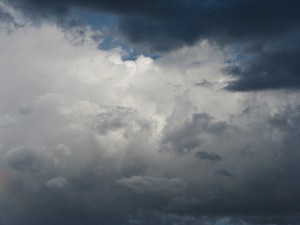 I know, in my own case, it took a long while to get out of a belief that a certain thing brought disappointment. If the thing happened, disappointment invariably followed. I found the only way I could make a change in the subconscious, was by asserting, “There are not two powers, there is only one power, God, therefore, there are no disappointments, and this thing means a happy surprise.” I noticed a change at once, and happy surprises commenced coming my way.

I have a friend who said nothing could induce her to walk under a ladder. I said, “If you are afraid, you are giving in to a belief in two powers, Good and Evil, instead of one. As God is absolute, there can be no opposing power, unless man makes the false of evil for himself. To show you believe in only One Power, God, and that there is no power or reality in evil, walk under the next ladder you see.”

Soon after, she went to her bank. She wished to open her box in the safety-deposit vault, and there stood a ladder on her pathway. It was impossible to reach the box without passing under the ladder. She quailed with fear and turned back. She could not face the lion on her pathway. However, when she reached the street, my words rang in her ears and she decided to return and walk under it. It was a big moment in her life, for ladders had held her in bondage for years. She retraced her steps to the vault, and the ladder was no longer there! This so often happens! If one is willing to do a thing he is afraid to do, he does not have to.

It is the law of nonresistance, which is so little understood.

Someone has said that courage contains genius and magic. Face a situation fearlessly, and there is no situation to face; it falls away of its own weight.

The explanation is, that fear attracted the ladder on the woman’s pathway, and fearlessness removed it.